Housing Market Predictions: Where Did the Recovery Go? 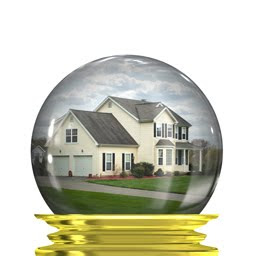 Let’s start with the experts. Every month for six months a panel of 111 leading housing economists, real estate experts, and investment and market strategists assembled by Robert Shiller, the man who called it right on the housing bubble, has grown more pessimistic.

In March, their consensus hit a new low. They see only a weak recovery taking place two years from now, though a few respondents do see a real recovery, predicting prices up 20 percent or so by 2015.

“This uninspiring view must be influenced by the persistently weak market fundamentals—high unemployment, supply overhang, an unabated foreclosure crisis, and constrained mortgage credit,” said Shiller, who is also cofounder and chief economist of MacroMarkets, the firm conducting the monthly survey of experts.

Experts like Shiller’s group have been wrong as often as they have been right on the housing recovery, but just hours before they released their survey, the housing world was rocked by two confirming reports.

The National Association of Realtors reported that February home sales fell 9.6 percent from January. Prices fell to the lowest level in nine years. “The results called into question whether the U.S. housing market is recovering or falling further,” said the Wall Street Journal. Then the Federal Housing Finance Agency confirmed that January home prices nationally have fallen to the lowest point since May 2004 and are 16.5 percent below the April 2007 peak during the housing boom.

All the valuation achieved by the housing tax credits has evaporated and then some. From the point of view of the millions of homeowners trying to stay above water on their mortgages, we’re worse off than ever.

Whether the experts are right or not, we can safely make several housing market predictions about the eventual recovery.

The first housing market prediction is that the recovery will not be national, or even regional. Rather, recovery will occur market by market, based upon three factors: employment, distress sales, and inventories. Where unemployment is stable or easing, foreclosures declining, and inventories within a six months’ supply, prices and values will improve no matter what is happening. A handful of markets—Honolulu; Washington, D.C.; San Diego; San Francisco—may have already achieved stabilization. Other markets, where foreclosures are continuing and jobs are still threatened, may not see recovery for three or more years.

The second housing market prediction is that the foreclosure era will end. It’s just that no one is quite sure when. For nearly a year, mortgage delinquencies and defaults have slowly but surely declined, reducing the number of properties entering the foreclosure pipeline. Unfortunately, the foreclosure pipeline is crammed with properties from the so-called hidden inventory and the mess caused by poor servicing practices. The result is that right now we are seeing only near-record distress sales, which are terrorizing home values, not the relief that will follow.

Third housing market prediction: when the recovery does come, the “good old days” won’t return overnight, if at all. It will take years for values in most markets to return to the levels of 2006. Foreclosures also won’t disappear overnight; they will gradually decline. More important, modest price increases will unleash a torrent of new listings from owners who have been biding their time until their local markets improved 5 or 10 percent. Studies of this “pending supply” suggest there will be enough of this new inventory to dampen local prices. The good news is these are move-up buyers who will add to local demand.

Another reason the good old days will never return is that structural changes have occurred during the five years of the housing bust. The most important is a decline in homeownership, not only as a statistic, but also as a goal of American households. A smaller percentage of American households own their own homes today than at any time since 1998, a dramatic decline from the all-time high in homeownership just six years ago.

Fewer Americans want to become homeowners. Fannie Mae’s quarterly housing survey found that the percentage of Americans who believe buying a home is a safe investment has fallen six points to 64 percent since January 2010 and 19 points from 2003, when a similar survey was conducted. Certainly, some of this sentiment reflects the pain consumers have suffered over the last five years, and homeownership may regain popularity with time and good fortune. In the meantime, though, a 20 percent decline in homeownership demand will create an entirely different real estate economy than the one we remember.

Steve Cook is editor of Real Estate Economy Watch and covers real estate and mortgage finance for leading news sites.  He is a member of the board of the National Association of Real Estate Editors. Twice he was named one of the 100 most influential people in real estate. Cook was vice president for public affairs for the National Association of Realtors.
READ MORE:
9 Things You Should Do to Get the Mortgage of Your Dreams
Spring 2011 Housing Market Prediction
Home-Selling Nightmare Never-Ending for Some Homeowners
Underwater with your mortgage? You’re not alone
2011 Outlook for Home Sellers