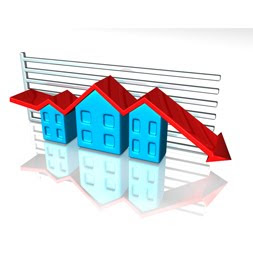 By any measure, it’s been a tough week for the real estate market:

According to the latest S&P Case/Shiller Index, home values have fallen back to where they were in 2002, although in some of the hardest-hit neighborhoods, housing values have fallen back to where they were in the 1990s, or earlier.
Pending home sales dropped 12 percent from the prior month, according to the National Association of Realtors. That is the lowest number since September, 2010, which is when the last installment of the home buyer tax credit ended.
Unemployment has remained stubbornly high. This week, more than 422,000 people filed for first-time unemployment benefits, far higher than economists expected. Without a job, it’s virtually impossible to qualify for a mortgage, with today’s tighter underwriting standards.
The Mortgage Bankers Association reports that the number of buyers applying for purchase mortgages (as opposed to refinance mortgages), fell to numbers last seen in the late 1990s.
New home sales are at record lows. The number of new homes sold is just above the lowest level since statistics were first kept in the early 1960s.

In the new State of the Nation’s Housing Report, released this morning, Belsky noted that millions of homeowners are stuck in homes that are underwater, and tight lending standards are keeping first-time buyers from being able to suck up loads of cheap, distressed real estate that is clogging the housing market.
“While the sharp declines in both home prices and interest rates have left homes in many places more affordable than they have been in decades, stubbornly high unemployment and tightened lending standards have limited the ability of many first-time buyers to capitalize on the situation,” he noted.
The report notes: “The combination of higher income, down payment, and credit score requirements in today’s broader mortgage market will prevent many borrowers from getting the loans today that they would have qualified for in the 1990s before the housing boom and bust. While a return to more stringent standards was clearly warranted, there is concern that overly rigid guidelines may unnecessarily restrict access of low- and moderate-income households to the benefits of homeownership.”
And watch what happens if Fannie Mae and Freddie Mac decide, as they are likely to do, that what the housing market really needs is higher down payments to keep borrowers making their payments.
The report concludes that the real estate market has not turnaround or begun a recovery. In fact, there’s a case to be made that prices haven’t yet hit rock bottom, a fact that many homeowners find upsetting.
It also notes that with the national homeownership rate dropping below 67 percent, and an unusually small number of renters turning into homeowners, it will take that much longer for the housing market to rebound. The National Population Survey notes that only 500,000 new households are forming, less than half the normal number and far below what is needed to create strong demand for housing.
What’s most interesting about the report is that it seems to conclude that it’s possible to have a turnaround in the real estate market simply because of the demand that was created by the 2009 and 2010 home buyer tax credits. In other words, if we keep giving home buyers $8,000 (or up to $18,000 if the federal tax credit was combined with certain state tax credits), home buyers will figure out how to purchase property.
It hardly seems a recipe for a housing market turnaround, and my prediction is that we won’t work out way out of this anytime soon.
To have a sustained recovery, we need more than another home buyer tax credit. That won’t fix the huge wave of foreclosures that will last through next year’s Presidential election cycle, and possible even through 2013. If unemployment doesn’t drop significantly – and soon – foreclosures will continue and fewer buyers will be eligible to purchase a home.

Ilyce Glink is a best-selling author, real estate columnist, and web series host. She is the managing editor of the Equifax Finance Blog and CEO of Think Glink Media. Follow her on Twitter: @Glink
Housing Market Predictions: Where Did the Recovery Go?
Congress Doubles Funding for Troubled USDA Housing Loans
Can I Save My Home From Foreclosure?